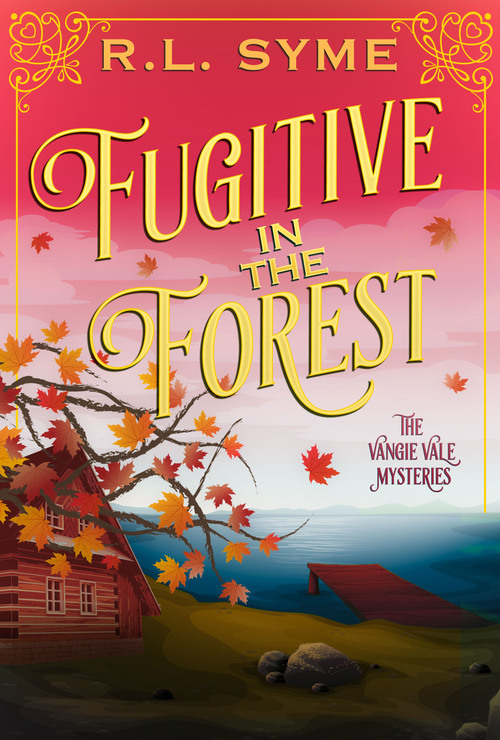 Book 6
in The Vangie Vale Mysteries

Fugitive in the Forest

Even in the great white North, Vangie gonna Vangie. She just cannot keep herself out of trouble, no matter where she goes. And when an old nemesis shows up and surprises her on her vacation, she can’t help but investigate.

This was originally written as a novella for the Passport to Murder anthology in Summer of 2021, but it’s on its own now, and we hope you enjoy!

How many towns can there be in the world that are just like Saint Agnes? With its quaint alpine architecture, its frosted peaks nestled up against kitschy tourist joints, its rugged small town innocence?

Apparently, a lot. Because as Emma and I discovered, driving through the Rocky Mountains, everyone thinks they invented this. The quintessential mountain town, I am learning, is more ubiquitous than quintessential.

Whatever those words mean.

But there we sat, in the Grizzly Bear Cafe in what appeared to be an exact replica of the touristy mountain town we left across the border in Montana. Emma needed a getaway, and she suggested Banff. But when we reached Banff, it was over-crowded, so we kept driving. Lo and behold, we drove into Fort Stewart, and it felt like coming home.

Not that I would call Malcolm hunky.

But Emma and I couldn’t throw a stick in Fort Stewart without hitting the hunky sheriff. We’d spent two days eating at the Grizzly Bear Cafe and, so far, the sheriff had been holding court for five of the six meals.

Of course, they don’t call a sheriff a sheriff in Canada. They’re called Mounties. Still. Law enforcement. Uniform. And cute as a button.

He had a little cadre of friends—one other officer and three locals—who took up the corner booth in the Grizzly Bear Cafe. And the hunky Mountie was making eyes at Emma for a solid day.

The Grizzly Bear Cafe was nestled among cute shops along the single street of downtown that Fort Stewart boasted, with an incredible view of the Canadian Rockies in the middle distance. The mountains weren’t quite as close as they were in Saint Agnes, but you can’t have it all, y’all.

Emma’s idea of a vacation was hiking to lakes and looking at rocks and such. Not my bag, but she was my best friend, and she needed the break, so I indulged her. It was early Fall, so it was still warm enough during the day, and cool at night, and we spent a good amount of time sitting on the porch of our rental cabin, reading and talking and decompressing after the way the last year had gone.

She hadn’t admitted this to anyone else, but the day her divorce finalized, I knew she needed to be out of the country. Perfect excuse for me to get some miles on my passport. I’d never been to Canada. They have milk in bags. And, just so everyone knows, Tim Horton’s is worth the trip alone.

I was counting the days until we’d drive back through Calgary on our way home, and get some more Timbits. The bakeries in Fort Stewart left something to be desired.

But the Grizzly Bear Cafe was a delight.

Mountie or no Mountie.

When we entered the cafe on Thursday morning, Emma took a seat not facing the Mountie and his friends. She sat in profile to his view, and I wondered if she was intentionally teasing him, or if she hadn’t noticed he was watching her. If it was the latter, it was about time for Vangie to step in and make hay in the day.

“You know that cop has been watching you for days, right?” I asked, into my coffee cup, in a low voice.

“The one in the corner, holding court.”

Emma didn’t look, and she didn’t smile, but her eyes smiled, those little creases in the corner that brightened her whole cute face. She’d pulled her curly blonde hair into a pony tail today, no doubt in preparation for being up in the wilderness again. And I combed the menu for something I hadn’t tried yet that would allow for a whole day of hiking.

This was my third breakfast—fourth if you counted breakfast for dinner—in Fort Stewart, and I’d exhausted the Grizzly Bear’s non-carb options already.

The waitress, Trudy, approached warily. After only a few meals, she already knew how long it took me to order and I flashed her an apologetic smile.

“You want me to come back?” she asked.

Trudy was tall and long-legged with short-cropped hair that swished every time she turned her head. She had to be in her mid-50s, and she’d been working every morning since we arrived. I already knew more about her than I wanted to, because on the slow times, when it was just us and Mountie McHunk, she stood behind the counter and talked loudly about her husband and his hired man and their financial woes.

I shook my head and gestured to Emma. “I’m sure she’s ready, and the pressure will do me some good.”

“I’ll just have some toast today,” said my best friend, quietly, like she was trying not to be overheard.

“You want anything on that toast?” Trudy asked.

“Surprise me.” Emma handed back the menu and stared at me, knowing the pressure was on.

I fumbled for some kind of decision and ended up ordering the same thing I’d had the day before. A veggie omelet with a side of ham.

Not Canadian bacon. I learned that the hard way, on morning one. Trudy did not find Canadian Bacon orders to be funny.

When Trudy walked away, I saw her reach inside her pocket for her phone. She had to stop in the middle of the aisle to look at whatever was on the screen, and she stood stock still for quite a time before she started walking again.

The smack of her hand on the counter startled me, and she called out to the back of the kitchen, “Tom’s on his way in with Stevie. Better make a couple of full Englishes, heavy on the beans, and I’ll start a new pot of coffee.”

But there was an edge to her voice that I didn’t like.

Tom was her husband—we’d learned that on day one—and Stevie was the hired man. I wasn’t sure what a full English was, but we hadn’t met either of them. Like a lot of small towns, we saw the same people every day, and I was starting to find out some of their names and little things about them. Still hadn’t managed to snag the name of Mr. Hunky Mountie, but he’d been stalking my friend so intentionally, he’d make his move at some point.

I never expected it would be over a dead body, but… how else would my life go?