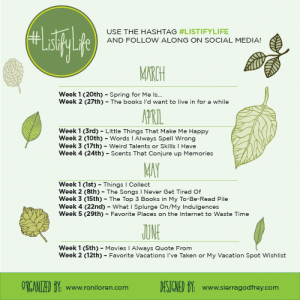 If you’ve been reading my blogs over the years (I’ve been blogging in some form since 2004), then you know how much I LOVE LISTS. Typically, lists not divisible by five, and the randomer, the better.

So when I found Roni Loren’s #ListifyLife challenge, I had a mini moment of ecstasy and decided to join right in. So I’m going to participate. I hope you will, too. The first day is on the 20th of March (first day of Spring). Beautiful graphic above by Sierra Godfrey. I’ll be blogging and pinning, starting on March 20th. Join me. Or do your own #ListifyLife challenge. Or do both!

My books are also available for purchase via Amazon UK, Amazon Canada, and Amazon Australia.