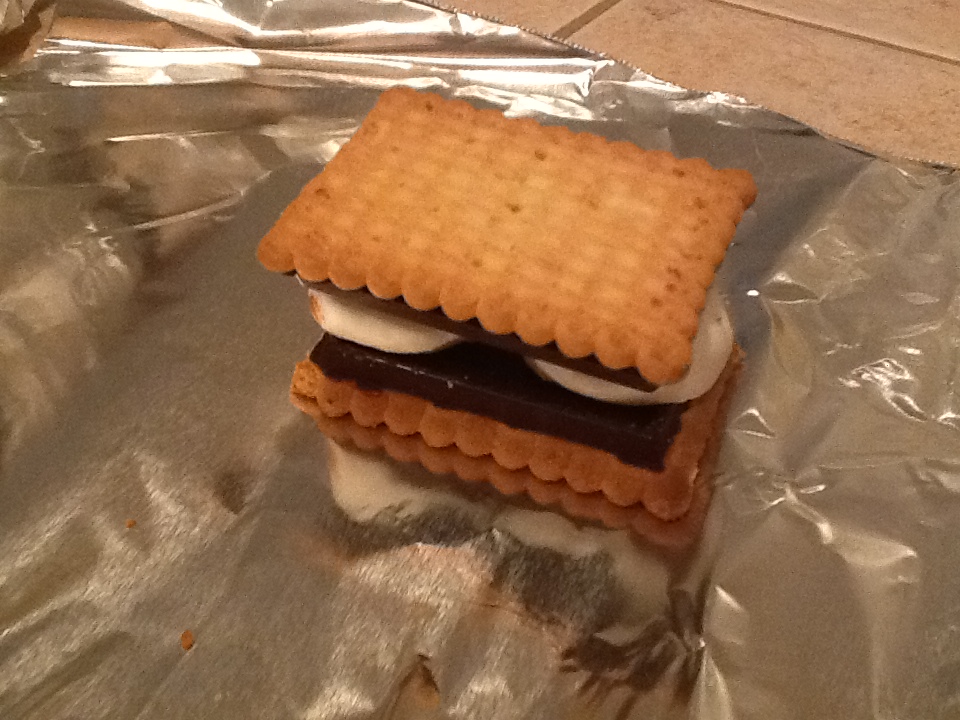 As part of Project: Rebrand, we here at rlsyme.com are developing a few new things. Fridays (although I’m late for last week–September 6) will now be recipe days. Or, as we’re calling the spot, New West Test Kitchens. You can read about why it’s called that here. For now, let’s get on to the first test. 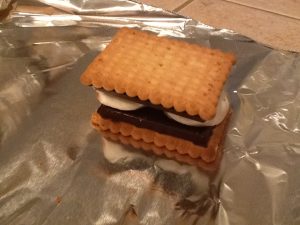 When flipping through the old home cookbooks, one of the things that stood out to me as a Fall food was the section of outdoor/campfire food. And right at the end, there was a recipe for Indoor S’mores. I decided this would be my first test kitchen because there were so many different ways I could think of to make Indoor S’mores, and I wanted to try them all. The basic part of the recipe was to heat packets of things in the stove. I thought… wouldn’t it be easier to try it on the grill? So the original recipe for all of the following Becca items was varying times at 350 in the oven. But I adapted it for the grill.

The original recipe was to take actual graham crackers, chocolate, and marshmallows, wrap them in foil, and bake them in the oven. I tried that on the grill and it was marginally effective. But, by far, the best tests came out in the cookie arena. 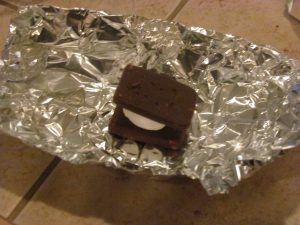 The second “recreation” was to take two graham-like cookies with some sort of chocolate covering, put a marshmallow between them, wrap them in foil, and put them on the grill. This was, in my opinion, the best outcome.

I tried several different cookies. Pinwheels (which already have Marshmallows) were sort of a bust. Chocolate covered grahams were tasty, but had too much chocolate on the outside, and got messy. There was a special Belgian dark chocolate cookie which had the best cookie experience, but the chocolate didn’t melt well (even in five minutes). And then, there was, in my opinion, the most successful of all the cookies which was the:

Overall recommendation: I would definitely try these on a cold Fall day, as a surprise for the kids, or yourself, for dessert. Especially if you’re looking longingly up at the mountains (like we do in Bozeman sometimes in the Fall), knowing it’s too cold for family camping, but still nice enough outside to maybe be grilling. Definitely use the Fudge Stripes. They’ll be a super quick, tasty dessert.

And now, to the second version of Indoor S’mores.

As a little girl, going to the farm was my favorite part of the summer.  My grandma was the best at treat making and this was one of my favorites!

Here is her original recipe:

Put cereal into a large bowl.  Pour hot mixture over cereal.  Toss quickly until coated with chocolate syrup.  Fold in marshmallows, 1 cup at a time.  Press mixture into pan evenly with butter spoon (or greased hand!).  Let stand for 1 hour before cutting into bars.

disaster!  what a mess!

okay.  not really, it turned out okay and tastes amazing!  but it was very messy!

There are several ways to update this recipe, as far as i’m concerned.  You could toss out the cereal and try to make it with regular graham crackers.  I remember having a version of that in elementary school.  The grahams were crushed to bits and used as a crust layer, with chocolate and marshmallows melted over the top.  It was good and s’mores-ish.  However, I am trying to make a “rice krispie” version of s’mores, so I won’t do that this time.

Instead, i’m going to eliminate the corn syrup and a lot of the chocolate chips.  Don’t worry, there will still be plenty of chocolate in there, just not 2 cups worth!

Here’s the recipe I ended up with:

Grease 9×13 pan.  Empty dry cereal into a big bowl.  Add 1 cup marshmallows and chocolate chips to that cereal.  Melt margarine, add remaining marshmallows and melt all together.  Pour melted marshmallows over the cereal and mix.  Press mixture into pan and let sit.

The biggest problem I ran into was getting the cereal into the pan.  I ended up with a LOT of the cereal/marshmallow mix on my hands.  The chocolate chips and extra marshmallows ended up melting in with the hot mixture.  I had wanted a few whole mini marshmallows in the bars for decoration, so next time I might add them last, after the mixing is almost done.  But I did like how the chocolate melted in somewhat, spreading it’s goodness around.  Could use chopped candy bars too if you prefer.

Give it a try.  Let us know what you think.

So, here’s the NWTK question of the day: How might you remake one of these recipes? What would you change, or what have you changed, and how did it turn out?