The Problem With Setting Goals 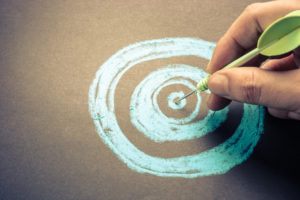 I’ve been working through a couple of goal-setting books in the last couple of weeks. I won’t name either one of them, because there is nothing magic about the particular goal-setting book you use. They’re all mostly the same. They all encourage you to set goals (six, ten, fifteen, whatever number) and then ask you to break down those goals into action steps. It’s a time-honored process. From vision to strategy to tactics.

But here’s the problem.

Some of us don’t know how to set goals in the first place. So just putting out a sheet that says, “set goals here” isn’t going to be effective enough for someone who’s not intuitively strategic. So here’s my random rant about goal-setting, and a couple of suggestions about how to set goals that you’ll actually achieve.

Most of us have heard about SMART goals (Specific, Measurable, Achievable, Relevant, and Time-Bound). If you haven’t, look here. Step one, of course, is attempting to set goals that you will actually be able to achieve, and that article will help. But here’s my bigger beef.

There is a good amount of research in the Productivity arena that insists, many of us don’t achieve our goals because we set too many of them. Just as a for instance, someone asks you what you want to accomplish for the year, and you’ve got a list of seven things. The problem is, you’ve only got X amount of time to accomplish those goals, and you start on every one of them tomorrow, then get burned out, and quit halfway through the year.

If you follow the 4DX model, which is an executions discipline book, about how to execute big goals, then you’ll know that the best way to accomplish goals is one at a time. One BIG WIG (wildly important goal) at a time. Focus your “change capacity” on the most important thing you could do in the near future, and make sure that goal happens. (I highly recommend reading the 4DX book, by the way. Even though it’s made for corporate teams, it’s an excellent resource for anyone who has a hard time with execution.)

Let’s just take the average person’s New Year’s goals as an example. Most of us will have four or five goals: Lose weight, save money, work harder, do better. Let’s just assume you have those four goals. (First of all, they’re horribly not-SMART, but let’s not worry about that for the time being.)

If you assume that you’re already busy, already working hard, already not sleeping enough, and already not eating well, then just to start off, you probably don’t have a lot of margin to play with. But let’s assume that you can cut things and find one extra hour every day.

Breaking down the four major goals into action steps, the goal of “lose weight” means that you have to do, for instance, an extra two hours a week of meal prep and shopping, plus an extra fifteen minutes a day to sit down at each of the three meals to eat, plus an extra thirty minutes of exercise per day. Before you can start “saving money”, you have to first learn to control your impulse buying. (This is a habit that’s particularly hard to kick. Instead of white-knuckling it with no skills, let’s assume that you decide for the smarter option of adding a skill, which means you need fifteen minutes of reading per day, and then five minutes of meditation per day to help you address that habit change.) The goal of “work harder”, if you’re an author, probably means that you’re going to try to write more words every day. Let’s say you’re going to add an hour a day of word-writing.

More than likely, you’ll get one week in, or even two or three weeks in, and your old habits will re-assert themselves, and you won’t have the capacity to keep doing them all, so you’ll stop doing them all. This is the best thing for your sanity, but now you’ve ended up not-accomplishing your goals, again. It’s probably a pattern.

Instead, I’m going to reference the 4DX model again.

Set ONE goal. One. One big one. Let the rest of your life stay as it is, pick the most important goal, and change that. Whatever it is. What is the ONE thing that is the most likely to make a big difference in your life? Don’t over-extend yourself this year. Do one thing. Make one change. And when that change has been assimilated, then do ONE more. Just focus on the wildly important only. Just try it.

What do you have to lose?